How Arbitration Agreements Can Bite The Businesses That Draft Them 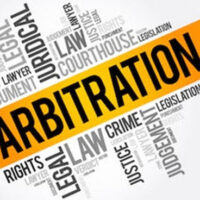 Many consumer contracts and agreements contain arbitration provisions. These are usually inserted at the behest of a business owner seeking to minimize its own exposure to potential litigation should the consumer have a legitimate grievance. Arbitration often restricts many of the rights consumers would otherwise have in a traditional litigation forum. On the other hand, sometimes arbitration agreements do come back to bite the business that insisted upon arbitrating in the first place.

A recent decision from the Florida Third District Court of Appeal, Baron v. L.P. Evans Motors WPB Inc., provides an interesting case study on this point. This case arose from the lease of a motor vehicle. The customer in this case leased a Mercedes from the dealership. The parties signed a three-year lease agreement that contained both an arbitration provision, as well as a requirement that the customer would pay any legal fees that the dealership might incur if it needed to hire an attorney “to enforce its rights” under the lease.

When the lease ended after three years, the customer returned the vehicle. A dispute then arose over an $8,500 “excess mileage” charge imposed by the dealer. According to the lease, the customer agreed to pay 25-cents per mile for any miles the vehicle was driven during the lease period in excess of 22,500 miles. The customer disputed the charges and filed for arbitration, as required by the lease.

The case proceeded to arbitration. The arbitrator issued an award–similar to a judgment in civil litigation–in favor of the dealership. However, the issue of whether or not the customer had to pay the dealership’s legal fees was never submitted to the arbitrator. The issue was therefore not addressed in the arbitrator’s award.

The dealership subsequently asked a Miami-Dade circuit court judge to confirm the award. The dealership also asked for an award of legal fees pursuant to the terms of the lease. The judge granted both requests. On appeal, however, the Third District said an award of legal fees was inappropriate. After all, the parties had expressly agreed to arbitrate all disputes arising under the lease agreement. Indeed, the appellate court said the agreement was “unambiguous” in stating arbitration was the exclusive remedy. Having elected not to arbitrate this issue, the Third District said the dealership could not now seek to litigate it in court.

If you find yourself involved in any sort of contract dispute, it is in your best interest to work with a qualified Sarasota business litigation lawyer who can help you understand and enforce your rights. Contact the offices of Moran, Sanchy & Associates today to schedule a consultation.